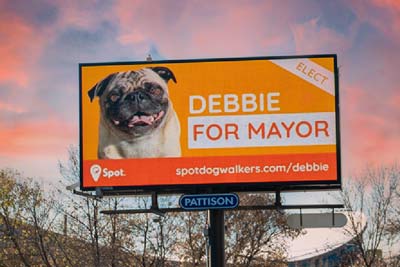 In an unexpected turn of events, Debbie — a 5 year old Pug with next to no political experience — has announced her candidacy in Calgary’s upcoming mayoral election.

Born an Okotoks farm girl, Debbie made the move to the big city at just 10-weeks of age and has been pounding the pavement here in Calgary ever since.

Despite the fact that she’s never worn pants, brushed her own teeth, or traveled on a plane, Debbie knows a thing or two about the world we live in, most important, how to bring joy and happiness to others with kindness and compassion.

With Debbie's team working like dogs day and night, they've not only prepared a fleet of memes but have also reserved a billboard outside the Saddledome (at Olympic Way & 11th Ave), leaving rival candidates reeling, since Debbie's sure to win over "on-the-fence" voters with her adorable face.

Not by total coincidence, Debbie the Pug also happens to be the dog of John Minchin, co-founder & CEO of Calgary's own tech startup, Spot Dog Walkers.

Founded in 2016, Spot's on a mission to make all animals' lives better. For dogs, that means providing private walks whenever you need them; for other animals, that means donating proceeds to elephant charities abroad!

Spot hopes busy Calgarians will make their dogs happier, animals abroad happier, and themselves happier (and less time-crunched), by "Spotting" their dog a walk with Spot's iOS & Android app.

Beginning in Calgary, now dog owners also in Edmonton, Vancouver, and Toronto can use the Spot app to get private dog walks, now or next week, with insured and background-checked walkers.