Get 50% Off Your First Walk

5 Accessories for Hiking With Dogs

How To Hire Dog Walkers Near You

How Long Should You Walk Your Chihuahua?

How to Care for a Dog: 9 Basic Tips for Every Dog Owner

The Benefits of Hiring a Dog Walker

Back To All Blogs 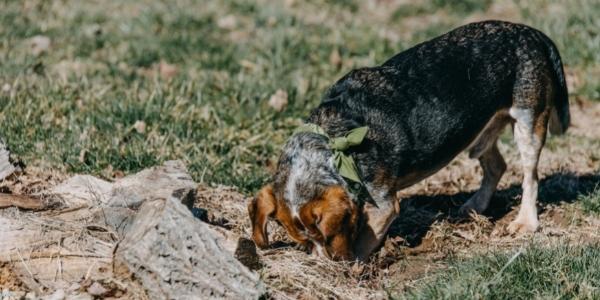 Dogs experience the world through their senses, but their nose is by far this most powerful. In fact, it can be up to 100,000 times more effective than the human nose! When your dog is on a walk and they start sniffing – let them! This is how they learn about the world around them, exploring and sating some of that boundless curiosity.

It’s one of their favorite hobbies. With each sniff, your dog is processing more and more information. Much like when your dog sniffs other dogs, they can learn about other dogs, the grass, their environment and so much more. They then store this information for later use. For example, some dogs will recognize others based on their scent alone – your dog’s eyes work great, but they are nowhere near as powerful as their sense of smell.

Keep in mind that your dog often can’t learn everything from one sniff, so that is why they will keep returning or linger. The more they smell, the more they learn. So while it may be hard, but it is important to let them smell while out on a walk.

This is so critical to dogs and their survival that they have developed a special organ that can help them to identify chemical scents and pheromones that are completely undetectable to humans. So if it looks like your dog is smelling nothing, that’s just because your senses aren’t refined enough to detect what your dog does!

One way that you can keep your dog mentally stimulated is by varying up their walking routes. This can help them to learn more about their surroundings and help keep them interested. Not only will it break up the routine, but it will also give them the opportunity to smell new things – including new dogs! Just make sure that you have plenty of time when you change up routes. Your dog will often take extra time to smell everything they can get their noses on.

Too, your dog may be returning to places where they have marked their territory, checking in and remarking it for other dogs to smell. Dogs are territorial and with their keen sense of smell, it is important for your dog to make his mark.

If your dog is sniffing too much and you want to move your dog along, resist the urge to pull them. This could be harmful to your dog. Instead, try to use a recall word like “come” or call their names on the walk. This may break the concentration and get them to come to you. You can also try to entice them with a treat.

These methods should only be used if your dog is sniffing in excess. Sniffing is a natural behavior, so some is expected on a walk. As long as your dog isn’t sniffing and eating anything harmful, be patient and let them explore. Harmless curiosity should always be rewarded – it keeps our dogs from engaging in more destructive behaviors.